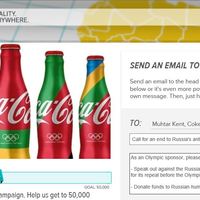 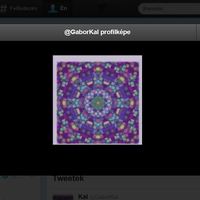 Send an email to the head of Coca-Cola

Coca-Cola bosses are meeting to decide if they should speak out against Russia's anti-gay laws. As a major sponsor of the Olympics, Coke has been under growing pressure for months.

Coca-Cola could claim Russia's anti-gay laws have nothing to do with them. But if thousands of us email them now, they could see that this is a growing threat to Coca-Cola's fun, friendly image.

It could be enough to get them to condemn the anti-gay laws, in a major blow to President Putin. Can you send a quick email?

Please visit to All Out website, where you can find an example email, however it's even more powerful if you personalise it with your own message.

European Parliament (EP) debated homophobia and xenophobia in Russia on 10th October. Regrettably there was no any representative nor from the Office of High Representative for Foreign Affairs, neither from any other office of the European Council, despite the questions were addressed to them as well.

Some MEPs mentioned, that IOC should withdraw the 2014 Olympic Games from Sochi, Russia unless Putin drops the criminal and marginalizing laws against LGBT, but nothing happened.

Today, I wrote an email to the CEO of Coca-Cola. It may never be read, but perhaps in some small way, it will help. Happy reading, and be sure to speak out for what you believe in—no matter how big or small.

I've been drinking Coca-Cola longer than I've been drinking water. I have always admired your company—for its impeccable branding, its undeniable quality, and its forward-thinking innovations. At this pivotal moment, you hold immense power, and your decision to speak out against Russia's anti-gay legislation could prompt the Olympic Committee and others to take a stand in a way that, frankly, has been poorly lacking to this point.

I am not an athlete, I am a theater-maker; still, I always look forward to the Olympics and my friends know me as the guy who is glued to his TV, Coke Zero in hand, for every second of each Olympic Games. Together, Coca-Cola and the Olympics symbolize aspiration, dedication, and free will. There is a reason Russia has very few global companies like Coca-Cola. I urge you to exercise the immense power you hold for the stifled gay citizens of Russia, the safety of the gay athletes of the 2014 Winter Olympic Games in Sochi, and for the progress of equal rights worldwide.

Thank you for your consideration.